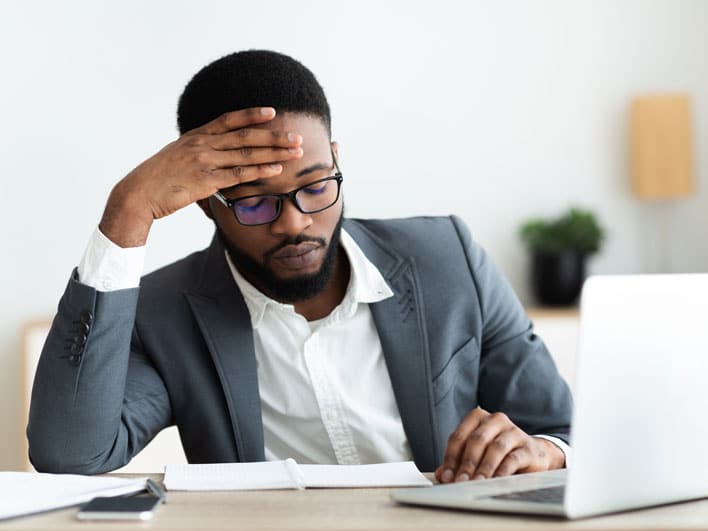 How Can a Fear of Failure Undermine Your Business Success?

How Can a Fear of Failure Undermine Your Business Success?

The roots of fear begin early

Fears begin early in our lives. We don’t like to think of ourselves as fearful, but we’re all afraid of certain things. If we’re honest with ourselves, we know this has been true since childhood.

As adults, we realize some of those fears were real, while others were imaginary. As children, we may have been afraid of the dark, or monsters under our bed, or maybe even a bully at school.

Sadly, as we grow into adulthood, our fears seem to grow with us and seem even more threatening. Some may be afraid of heights, others of confined spaces, but a surprising number of adults are afraid of failure.

The fear of failure is self-limiting

Psychologists understand the fear of failure as a self-limiting factor in our lives. Expressly, it can limit the willingness of managers to continue making proactive decisions.

Some business leaders allow fear to limit the potential of their business. Consequently, the growth and development they once achieved eventually becomes a memory. So, what may begin as a moment of indecision becomes a leadership problem that inevitably threatens the entire business.

The fear of failure undermines leadership

Jack’s story is a classic example. Jack produced quality work and served his employer well. He always worked hard and put in long hours in learning how to do his job well and serve his customers.

Three years ago, he chose to leave his job and start his own business. He took a few significant risks and, as always, worked hard to serve his clients well. As a result, his small business began to grow and prosper.

Jack’s dedication and commitment led to more clients and further growth. Six months following his launch, he was leading a small staff, making good money, and enjoying his role and responsibilities.

Jack begins to worry. He wonders whether the risks that boosted his initial business growth are now too risky. His fear is causing him to stop doing the very things that helped him build the business in the first place. He’s afraid that if he takes a chance and fails, he’ll look bad and potentially jeopardize his business.

So, Jack avoids risk and plays it safe. His fear has changed the way he behaves and how others perceive him. He’s moved from being a bold risk-taker to someone who is more risk-averse.

How can you overcome your fear before it ruins your business?

Jack needs to have a conversation with himself to figure out why he’s “playing it safe.” Obviously, this approach isn’t working for him. He needs to evaluate himself and face what’s happening and what needs to change. He needs to consider the following questions.

1. What are you afraid of at work?
2. What is it you're afraid of losing?
3. Are you avoiding risks you took in the past that helped your business grow?
4. Do you feel like you have too much to lose to continue taking those risks?
5. Do you feel there is any risk in “playing it safe?”

Maybe Jack’s fears are more like the monsters under your bed when you were a kid. Getting past a fear of failure may be as simple as assessing your concerns and separating the real from the imaginary. Imagine what might be possible if, instead of being fearful, you began to take risks again. You might be surprised by what you can achieve.

About the Author: David Cox

David Cox is the Principle Owner of ThirdPartyBlogger.com. He is a career generalist, having served in six different career fields over the past 35 years. David writes to encourage those who choose to follow their varied interests by seeking opportunities to apply their multidisciplinary training and experiences to develop their current career role
Go to Top